Applying early pressure on attack must have been the game plan for Akarana who sent a strong message to their opposition from the get go.

A cross field kick from Akarana had their no.2 winger Asoleilei score in the left corner in the first few minutes, a tricky conversion scored by their half to take the score to 6-0 in the opening minutes.

The classy stepping game of Counties’ Paea Fotu had him dodge three players from Akarana on his way to the left hand corner where he levelled the scoreboard after another difficult conversion, this time from the South Aucklanders.

With increasing momentum, the boys in red were back near the try-line, a slick offload sending Counties across the line again for their second four pointer – score 10-6.

Then came another beauty cross field kick from Akarana which sat up just in time for their winger to score in a similar fashion to his first of the match, a successful conversion sending Akarana out to a 12-10 lead.

Counties replied with a try of their own under the posts minutes later regaining the lead with the scoreboard reading 16-12. That was backed up by another try shortly after as the teams headed into halftime, Counties up 22-12.

The second half started much like the first, with a bit of Akarana flare in the shape of two tries in several minutes successfully converted to put the boys in blue out in front, 24-22.

A kick chase from Akarana had spectators on the edge of their seats, catching Counties off guard slapping another six points on the scoreboard after yet another successful conversion, 30-22.

The exemplary defence of Akarana was held on their own line for almost eight minutes before Counties’ countless attempts at crossing the line were shut down.

Counties were then faced with a ‘must score’ set in the dying minutes of the game which they delivered on scoring in the right hand corner, score 30-26. One final miracle was needed if they were going to score in the final minute to overtake Akarana. But back-to-back title wins were not to be for Counties, Akarana enjoying a sweet 30-26 victory taking home the 2018 17s National Youth Tournament title.

A firing Auckland Vulcans won the best start with hesitation killing the South Islanders in their first try attempt forced by the pressure of the Vulcans’ defence.

The Vulcans reaped the rewards for their majority possession drawing first blood with a four-pointer along the right side minutes later.

After a back and forth battle, the Aucklanders came up with another four points although unsuccessfully converted hitting the sheds up by 10-0 at halftime.

Back into the second 25 minute half, a line drop out kicked into touch by the Vulcans had the Scorpions in with another chance opting for a penalty goal to take the score to 10-2.

A run from Scorpions prop Jaedon Wellington had the boys in black and white cross for their first try, the scoreline taken to 10-8 after a successful conversion. It was starting to look like the Scorpions had a plan up their sleeve. The Auckland Vulcans then gave their opposition the helping hand they needed kicking the ball out on the full from the restart.

Perpetual motion saw the Scorpions tempo rise, their momentum being too much for the Vulcans who let in their second try in five minutes, 10-12 to the Scorpions. A 100 percent kicking rate from the Scorpions pushed the scoreline out to 10-14.

With seven and a half minutes on the clock, the Vulcans looked dangerous with ball in hand, capitalizing on the tired Scorpions defence scoring just left of the post locking up the scores at 14-all – the boot of Michael Taufa putting the Vulcans in front by two once again (16-14).

The Scorpions needed a miracle in their last set and a last minute try looked possible with an explosive run down the left wing from the Scorpions. But the fairytale ending wasn’t to be, the Vulcans taking home the 15s National Youth Tournament title with a 16-14 win.

Player of the Tournament – Stanley Iongi

Man of the Match – Stanley Iongi

The Akarana Falcons 15s have begun their national title defence strongly with a commanding 60-4 victory over the Wellington Orcas today. Taylor Raj and Naisa Pahulu scoring two tries each in the one-sided result. They’ll be keeping a close eye on their Pool A rivals Counties Manukau, who ran up an impressive 46-0 victory over the Central Vipers.

In Pool B, The Auckland Vulcans were too good for the Northern Swords winning 40-12, with the South Island Scorpions outplaying Wai-Coa-Bay 30-18. Uriah Tuli scored a double for the Scorpions, who face the Vulcans at midday tomorrow. Wai-Coa-Bay and Northland will both be seeking their first win against each other in the other Pool B match on Tuesday.

In the 17s grade, 2017 champions Counties Manukau came from behind to beat Wellington 26-14. NZ 16s representative players Sione Moala and Taniela Otukolo were standouts for the Stingrays, with Orcas halfback Dallas McEwan performing admirably despite the final result. The Akarana 17s started their campaign well with a 46-0 victory over the Northern Swords; centres Naufahu Whyte and Samuel Kamu both crossing the line for the Falcons.

The South Island Scorpions marched to an important 28-20 victory over the Central Vipers. Griffin Neame and Caius Fa’atili standouts for the southerners, who survived a late charge lead by Tyson Chase and Tyrese Ratahi. The Auckland Vulcans were too good for Wai-Coa-Bay, running out 26-12 victors. Despite being behind at half-time, the Vulcans managed to get around the outside of the local side, with backs Okusitino Lui and L’ia Julius Lafaele bagging doubles for the Aucklanders.

The Vulcans head into a blockbuster match tomorrow with Counties-Manukau Stingrays; with Wai-Coa-Bay facing Wellington in the other match in Pool C. In Pool D, Akarana Falcons take on the Central Vipers, and South Island Scorpions playing the Northern Swords.

Both Auckland-based Zones have dominated the age-group event over the years and again held the upper hand last year, in both the 15s and 17s competitions.

Both finals (15s and 17s) will be livestreamed on the @NZLeague Facebook page. 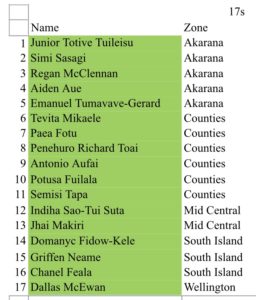 Akarana Falcons may be the top team from the Akarana zone but the Auckland Vulcans development team weren’t afraid to step up to the mark. It wasn’t till golden point extra time when the Falcons scored a victorious try that had them crowned the 15s National Youth Tournament winners.