Kiwi Fern Standouts In Round Three

Into round three of the NRLW competition, the Kiwi Ferns continue to stamp their mark on the game.

The Roosters were too much for the Knights earning their first win of the season. Playmaker Raecene McGregor looked much sharper this game. Her excellent decision-making created the space that led to both the Roosters’ opening two tries. Mya Hill-Moana continues to make an impact every chance she gets on the field.

It was a tough loss to take for the Titans, as they fell short against the Eels, but that didn’t stop Georgia Hale from being her best out on the field. Hale managed to make a 100% efficiency tackle rate with her 65 meters again, demonstrating why she is among the game’s elite.

A brave Brisbane Broncos outfit dug deep to fight off the Dragons 22-18 in an enthralling top-of-the-table clash. Amber Hall once again showcased why she is one of the best forwards in the game—managing a team-high 164 running metres in her 50 minutes of action.

The Newcastle Knights suffered their third defeat against the Roosters. Despite the loss, Charlotte Scanlan was immense for the Knights, topping their tackle chart with 36 tackles and a 97.3% efficiency rate. One of Newcastle’s most consistent performers, Annetta Nuuausala, led from the front again with a try, 85 running metres, four tackle busts, three offloads and 18 tackles. Autumn-Rain Stephens-Daly made two crucial tackles in both halves. Late in the first half, a crunching tackle on one of the Rooster’s standouts, Jessica Sergis, leading to a Roosters mistake. Stephens also made another strong fifth play tackle on the Rooster’s try line to force another error close to the line.

The NRLW ladder after round 3. 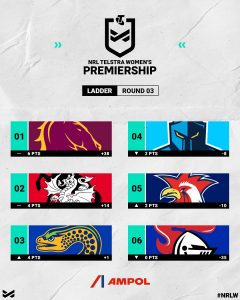