Join the Mad Butcher at the Eden Park tripple header

Thinking of going to the Rugby League TRIPLE-HEADER at Eden Park on November 2nd? 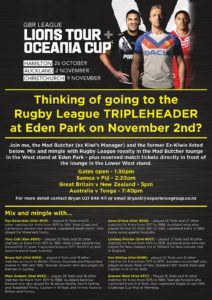 Bruce Gall (Kiwi #559) — played 3 Tests and 19 other
matches on tours to Britain, France, Australia and Papua New
Guinea in 1980 and 1982. Taranaki forward who also played for
Balmain in Sydney.

Mark Graham (Kiwi #535) — played 29 Tests and 16 other
matches for Kiwis from 1977 to 1988. Auckland backrow
forward who also played for Brisbane Norths, North Sydney
and Wakefield Trinity. Captain in 18 Tests and on two tours to
Britain and France.