Are you passionate about making a difference and having your say in shaping the future of rugby league in New Zealand?

New Zealand Rugby League (NZRL) are looking for 4 to 5 passionate youth (aged between 16 to 20 years old) to support and co-design the establishment of a Youth Advisory Group.

The aim is to work with selected youth to co-design the Youth Advisory Group, ensuring it is a meaningful and impactful foundation that works for youth before looking to expand the group further in 2023. We know our youth have vital insights, knowledge and experiences that will be invaluable to creating greater opportunities for our community and the future of rugby league in New Zealand.

What we are looking for

Selected youth will be expected to provide and share their experiences and knowledge, contribute towards set tasks created through meetings, and work collaboratively with all members of the group and NZRL.

Youth would be expected to meet monthly to complete the following objectives below in collaboration with NZRL before expanding the group in 2023.

If this sounds like something you would be interested in being a part of, please fill out this form here.

Expression of interest will be open until Friday 17th June. If you have any questions or queries, please feel free to email [email protected]

New Zealand Rugby League is pleased to announce the National Youth Tournament returns for 2021, albeit in a revised weekly competition format to cater to Covid gathering restrictions.

The 2021 National Youth Competition will take place over three weekends instead of its usual one-week tournament format, kicking off this Saturday, 2nd October.

Despite pandemic setbacks, the best of New Zealand’s rangatahi talent will be on display as Zones battle it out for the highly contested 16s and 18s age group titles.

Both 16s and 18s competitions for this year will comprise of two pools:

Pool A will kick off this Saturday 2nd October, while Pool B can only begin once Auckland is in Level 2, subject to the October 4 announcement.

Motu Tony, GM of Football and High Performance at NZRL says, “We were close to having to go two years without the Youth Competition due to Covid disruptions, but to see it ready to kick off in 2021, albeit a new format, is a great accomplishment.

“It’s a really exciting opportunity for these age group players, as it can be a steppingstone to NZ representative teams, our 20s competition and potential professional pathways. The high number of Kiwi NRL debutants  this NRL season who have played in our national tournaments and representative teams has been pleasing. This shows how important it is to hold our national tournaments as it provides our rangatahi with opportunities that can positively impact their lives on and off the field.”

Tony adds, “Thank you to the Zones, Districts and all NZRL staff who worked tirelessly behind the scenes to ensure the Youth Competition was possible. I’m looking forward to seeing the calibre of our young talent on display come October.”

Over the past ten years, the NZRL Youth Tournament has been home to some of the biggest NRL and Kiwi names such as Roger Tuivasa-Sheck, James Fisher-Harris, Chanel Harris-Tavita, Dylan Brown and many more.

No crowds are permitted at National Youth Competition games while at Alert Level 2.

After working alongside the NZRL to set out the vision for junior league in the country, the ARL will rollout the new Junior Development Framework (JDF) in full for all mini/mod (U6-U12) grades in 2021.

Supported by the NZRL, the ARL has piloted aspects of the framework in various children’s grades in Auckland since 2017, seeking consultation from local coaches, players, managers and club chairs along the way.

While the ARL will implement the new JDF immediately, the NZRL will be adopting a staggered approach with their regions in the rollout of the new framework.

The biggest changes are in the U6 grade where children have their first experience of organised rugby league.

Under the JDF the first eight weeks of the U6 season will be played under League Tag (non-contact) rules, while come the second half of the season teams will have the choice of continuing to play League Tag or to switch to traditional contact rugby league.

For that grade it will be mandatory for coaches to deliver a six-week tackle confidence programme through the opening two months of the season, regardless of which form of the game they choose for the second part of the year.

In relation to skill development and encouraging decision making in the formative years, a crucial aspect is the introduction of first-receiver bibs for the U8-U12 grades, with dummy-half bibs also being used from the U9-U12 grades.

Both bibs allow the player wearing it to run, score and be tackled without two passes being required or a change of possession being triggered (normal mini-mod rules state that two passes must be achieved to retain possession).

ARL game development and participation manager Sam Cawdron said the framework was about evolving the game to suit the attitudes and needs of those involved at junior levels.

“The JDF is heavily geared towards teaching safer tackling and giving kids confidence in contact, along with encouraging skill development, decision making and a learning and play-orientated approach for our youngest players,” Cawdron said.

“The move to introduce League Tag for the first half of the season for the U6 grade means teams can be put through a tackle confidence programme and then decide whether they are ready to move to contact or want to continue to play League Tag.

“This is to help build confidence and gives kids a chance to learn and be introduced to tackling.

“Providing kids with the option on when to switch over to contact allows them to be develop at their own pace, keeping in mind that current NRL stars such as Shaun Johnson, Benji Marshall and Ryan Papenhuyzen all come from non-contact backgrounds.

“League Tag is going to help open up rugby league to a larger group of the population who are interested in a non-contact activity.”

NZRL general manager of high performance and football, Motu Tony, said the changes are a positive for the game.

“Extensive research and collaboration have gone into this project to ensure that our participants at the Kiwi League Kids level (formerly mini/mod) have a rugby league programme that is enjoyable, safe and helps develop them on and off the field,” Tony said.

“I would particularly like to thank the ARL for their partnership and fantastic work during the three-year pilot programme, which has resulted in an offering that I am sure will be enjoyed by all our KLK participants.”

Due to the ongoing implications of the Covid-19 outbreak, New Zealand Rugby League regrets to advise that all NZRL run representative competitions and tournaments have been called off for the remainder of the year.

Community and Club competitions and trainings are still currently postponed until May 2 with that date to be reviewed in due course.

Due to the current uncertain revenue lines, these representative competitions would place too big of a financial burden on the Zones. International rugby league has also been cancelled for the foreseeable future, and NZRL has ceased all non-essential expenditure.

Greg Peters, NZRL CEO, “We are extremely disappointed that these competitions will not happen in 2020, but unfortunately, it was a decision that had to be made for the financial longevity of our game.

“Due to the extensive consequences of this pandemic across the code, we have had to make some significant short term sacrifices in order to see the game thrive long after this virus is contained.

“The impact and influence rugby league has is felt widespread both on and off the field. Although unprecedented, this decision was made fully with the longevity of our game in mind and the important role it plays within our communities.”

NZRL will provide a further update on club and community competitions in due course. Once lockdown restrictions are lifted, the focus will be on getting the grassroots game operating as quickly as possible.

Following the conclusion of the Talent Development Programme, New Zealand Rugby League is excited to announce the 25-man squads for the NZ16s Residents and NZ18s Residents. Congratulations to all of those selected.

Fixtures and more information on these teams will be released in the coming week. 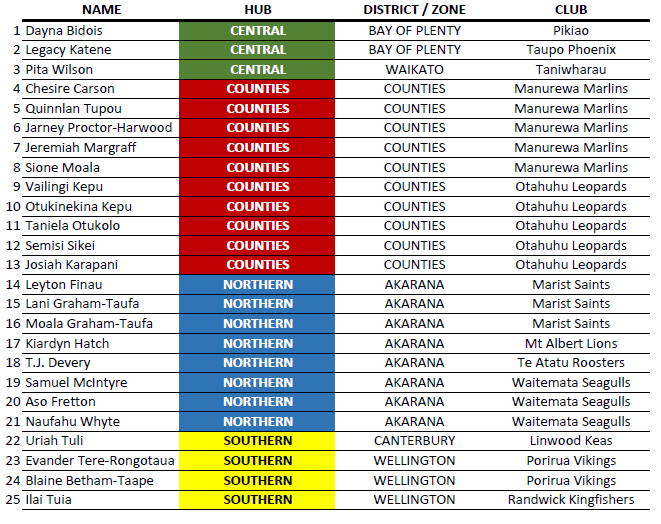 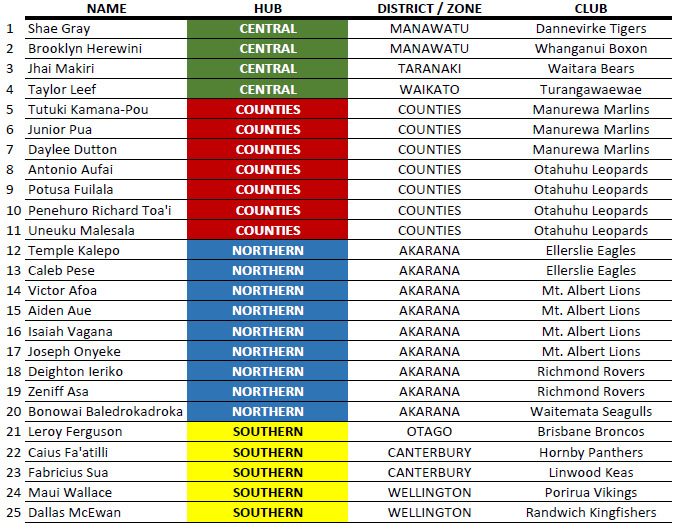 Round three of the Talent Development Programme’s competition phase saw the level of rugby league go up a notch where stakes were at their highest.

Teams had finals in their sights as Northern faced Southern and Counties went head to head with Central in both 16s and 18s age groups. Counties 16s waltzed into the final winning three from three where they will take on Northern who conceded only one game to Counties.

The 18s age-group saw Northern comfortably beat Southern for a spot in the final where they will play Central who pipped Counties in a thriller on Saturday afternoon.

Results from round three with footage below:

Finals draw to be played Saturday, March 24 at Cornwall Park: