To register or for more information, please contact Sam Pullen on 0274485358 or email [email protected] 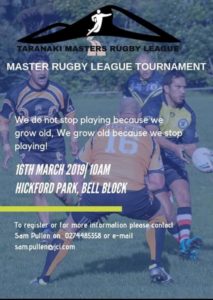 On 27 May 2018 the Patea Warriors from South Taranaki traveled to New Plymouth to play against the Western Suburbs Tigers in an intriguing game of Masters Rugby League, the weather was expecting heavy rain falls however the sun stood out and it wasn’t going to stop the players of yester-year partake in a physical match in the “Battle @ Ngamotu”.

The game was played with such passion but what else would you expect from these two legendary teams.

There was an incident that occurred during the game in which a Patea player was injured which was unexpected however the player is recovering well.

Although Patea took the win, you could sense the wairua from the Western Suburbs Tigers who never gave up and showed a lot of mana on the field throughout the game.

To see past players come out of the wood works from both sides giving their all and enjoying themselves was a awesome experience to witness.

Special Acknowledgement goes out the Western Suburbs Tigers Committee who were fantastic hosts on the day, the kai was phenomenal and enjoyed by all, also to a member of the Tigers club Edd Te Huia for his commitment and engagement towards the Masters organisation. Without the clubs involvement, this event would not have occurred.

Now that we will look forward to the next date which is set, the Patea Management  deem the next rugby league match as a “Give back to the local community event” – an appreciation to thank to all the supporters that have made the time and effort to go out and observe the Masters Games around the “Naki” region.

There will be a huge crowd wanting to see this in full effect considering this will be the first League game in a very long time.

On 29 April 2018 the Patea Warriors from South Taranaki traveled north to play the Waitara Bears in a game of Masters Rugby League, and what a game it was with some great tries, outstanding tackles and some good old fashion straight up the guts running.

The game was played with such passion and physicality, but what else would you expect from these two great teams and clubs. There was a great mixture of aged players, with the oldest being in his mid sixties, but for those who were there, age was definitely no barrier.

Although Patea took the win the game of rugby league was the winner on the day.
To see our past players on both sides giving their all and enjoying themselves was an awesome sight to see.

Acknowledgement definitely goes out to all the players and supporters of both teams who traveled near and far to be a part of this tremendous occasion, to the Patea Warriors Club for making the journey north and to the Waitara Bears Club who were fantastic hosts on the day.

Masters Rugby League is alive and kicking in Taranaki, and we now look forward to next date that is set with the Western Suburbs Tigers hosting on Sunday 27th May at Ngamotu Domain in New Plymouth.

It is with deep sadness that the New Zealand Rugby League acknowledge the passing of Philip Campbell, who dedicated much of his life to serving the game of rugby league in New Zealand.

Campbell, who passed away on Sunday, was the brainchild of Masters Rugby League in New Zealand, but he also looked out for the young, the up-and-coming and the social.

He tirelessly worked with Auckland Rugby League and the Ponsonby and Mt Wellington clubs, and recently helped launch and run the Physical Disability Rugby League.

Phil’s funeral is being held at Wm Morrison Funeral Home, Universal Drive Henderson on Wednesday March 14 at 12.30pm. In lieu of flowers, a donation box will be in the foyer.