Be a sport – League leads the way

We want everyone to have a fun and positive league experience and to achieve this, New Zealand Rugby League has developed the nationwide ‘Be a sport’ programme.

Aimed at encouraging supporters to get behind their players and match officials in a positive way, each team takes responsibility for their own supporters’ behaviour.

Before every game they nominate a sideline champion (for their team), who wears a hi-visibility vest, and backed by sandwich boards featuring the ‘Be a sport’ messaging, circulates amongst their parents and supporters.

If needed the Team Champion will provide supporters’ with the code of conduct, reminding them about alcohol-free and smokefree sidelines, the use of positive language and encouraging behaviour, along with the NZRL values.

The aim is to resolve any issues before they escalate and NZRL’s Legacy Manager Kirsty Sharp says the initiative “is all about making sure the kids are enjoying themselves.”

“The ultimate goal is to create an environment where our Mini and Mod players can learn the basic skills of rugby league while socialising and having fun with their friends.

“In turn, this will encourage kids to continue playing the game and perhaps go onto a more competitive level of play,” she says.

The West Coast were the first to roll out the programme at their junior competition last weekend and NZRL Development Officer, Paddy Bryne, says the programme is off to a great start.

“The campaign has definitely been well-received by all down here in the South Island – it’s great to see such a positive uptake.

The ‘Be a sport’ campaign will be implemented in each Zone throughout New Zealand and NZRL expects this to improve sideline conduct at all levels as the messages reach parents and fans of the game. 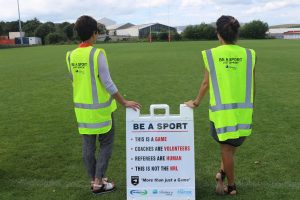