While the New Zealand Government’s announcement on guidelines for COVID-19 Alert Level 2, for if and when it is announced that the country will move to this level, is a positive step NZRL remains vigilant in the fight against the global pandemic with the health and safety of our communities remaining the number one priority.

As it stands we are still in COVID-19 Alert Level 3, therefore all rugby league activity (training or playing) remains suspended until further notice.

Under COVID-19 Alert Level 2, sporting activity can re-commence but only if strict public health and hygiene measures are in place.

NZRL, like other codes, will take the time to prepare and ensure all measures and systems are in place for a safe and structured return to play for our communities, when appropriate.

It is crucial we take the time to get this right, so New Zealand’s hard work is not at risk of being undone, and our communities feel safe and secure to play our game again.

NZRL will provide further information in due course regarding what rugby league looks like at Alert Level 2 as well as return to play timelines. What is absolutely clear is that will not be immediately following any announcement by the Government to move to Alert Level 2.

We thank you all for your patience and understanding during this time. 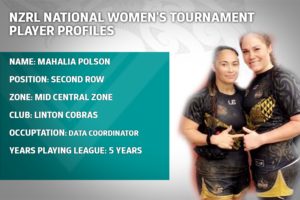 Why do you play league?

I love the physical challenge the game offers and the people I play with.

What got you into the game?

My first introduction to league was when I was six playing for my uncles’ team.  After my first season we ended up moving north there was no comp for kids, so I ended up playing rugby instead.

How long have you been playing for?

I’ve been playing women’s for around 5 years

What do you do outside of league?

I’m a mum of two, I work for a Maori Charitable Trust, Te Tihi o Ruahine Whanau Ora Navigation Alliance.  I dabble in a few other sports rugby, touch and I like to do a bit of CrossFit and boxing as well.

What are your biggest highlights or proudest moments?

What advice would you give to young girls wanting to get into league?

What are your goals?

To stay injury-free and make semi-finals for nationals

What are you looking forward to most about the National Women’s Tournament?

Playing with my mates!

The NRL has confirmed the three pools which will make up the inaugural Downer Rugby League World Cup 9s Sydney 2019, to be held at Bankwest Stadium in Parramatta on October 18-19.

NRL CEO Todd Greenberg said today the format of the pools would ensure key rivals face each other in the fast-paced, action-packed short form of Rugby League.

During the official launch of the tournament today in Parramatta, it was revealed that:

Mr Greenberg said the two highest-placed teams from Group A would progress to the Semi Finals, alongside the winners of Groups B and C.

The two highest-placed teams from the Women’s pool, which features Australia, New Zealand, England and PNG, will feature in the women’s final.

He added all teams would play one match on Friday and a minimum of two matches on Saturday.

“The World Cup 9s will feature the most exciting players to watch in the game, representing their nations and their cultures,” Mr Greenberg said.

“It will be a festival of Rugby League and the fast-paced, frenetic nature of Nines will be fantastic to watch.

“This is Rugby League rebooted – a unique and exciting way to showcase our wonderful athletes.”

Mr Greenberg also detailed some of the key rules which will be in place during the Downer Rugby League World Cup 9s:

NZRL CEO, Greg Peters, said: “It’s an exciting time for our international game, we’re looking forward to watching both our Ferns and Kiwis take the field in what will be an entertaining weekend of fast-paced rugby league action.”

Two-day passes for the Downer Rugby League World Cup 9s will go on sale for the General Public on Wednesday (July 24).

Single-day passes will be available to purchase for the General Public from August 7.

Tickets will be available via nrl.com/tickets.

The 12 teams in the men’s competition and four teams in the women’s tournament will compete across 28 matches and 12 hours of action. Every men’s and women’s match will be broadcast live across the two days of competition.

Congratulations to league legend, Sir Graham Lowe, who headlined NZ sporting identities in the 2019 Queen’s Birthday Honours – becoming a Knight Companion of the New Zealand Order of Merit. Firstly known for his dedication to the game, this accolade recognises his important services off the field, as he’s knighted for his work with youth and education.

Sir Graham has enjoyed a distinguished career in the game, coaching the Kiwis to victory over the all-conquering Kangaroos, guiding Manly and Wigan to success in Australian and English professional ranks, and steering Queensland home over NSW at State of Origin.

He previously received a Queen’s Service Medal in 1986 New Year Honours and became an Officer of the New Zealand Order of Merit in 2013 New Year Honours, but all his titles – including this latest – have recognised his community service.

The 72-year-old was knighted for his services to youth and education, with his Lowie Foundation delivering a literacy and numeracy programme to 12-19-year olds from disadvantaged backgrounds.

“Rugby league and sport are really important and play a big part in our lives, but I’m a believer in supporting, helping and educating disadvantaged young people,” he said.

“I saw many times young people who were oozing rugby league talent, but they lacked a successful pathway because they didn’t appreciate how important literacy and numeracy were in life. So many of them missed out and when I combine that with many of the players I’ve coached, I owe so much to them.

“A lot of them came from these really disadvantaged backgrounds and I wanted to see if I could put something back in that area. That’s what I’ve been really focused on for many years.”

We want to congratulate Graham for epitomising our More Than A Game philosophy and thank him for his hard work and dedication to effecting important change within our communities.

It’s with great sadness that we announce, former New Zealand Secondary School and under-18 representative Zae Wallace, has passed away after being struck down with the flu.

The young sportsman who’s represented New Zealand at age group level returned to Auckland this year following a stint with the Gold Coast Titans under-20 side and had been in an induced coma for four weeks.

At the beginning of the 2017 season, Wallace signed a contract with the Titans to play in the NYC under-20 competition. Wallace spent that season with the Titans then joined the Burleigh Bears in the Intrust Super Cup.

Playing at halfback and being the youngest member of the squad, Wallace was one of the Akarana Falcons star performers in their National Premiership championship victory in 2016. That same year he was named Auckland Rugby League’s College Player of the Year.

He won selection following a standout season with the Mt Albert Lions in Auckland’s Fox Premier Rugby League Competition. He had returned to New Zealand to play with the Northcote Tigers and had only played one game when he became ill.

Wallace is described as a “lovely and cheeky” young man, who had a great sense of humour and a great bunch of friends. A givealittle page had been set up to raise funds in support of his courageous battle, one friend wrote, “Champions don’t stop, they dust themselves off and push on. This young man is all champion.”

Our deepest condolences go out to Zae’s family and friends, not only was he a rising league star with exciting skill and potential, he was loved by many. A young talent that will be sorely missed.

He’s known to most as ‘The Mad Butcher,’ but what many may not know about Sir Peter Leitch, is just how much he has done for rugby league and the sport’s community in New Zealand.

It’s hard to remember a Kiwis Test match where Sir Peter Leitch wasn’t present and when it comes to Warriors games, he’s basically a walking billboard who pulls people from all walks of life into the game to get a taste of being a part of the rugby league whanau.

Many can recognise the unique ability rugby league has to unite and empower communities, and those people who make that possible very rarely want the accolades to show for their hard work. Sir Peter Leitch is one of those special people who inject rugby league with life and purpose but he is quick to point out that he “doesn’t do it for the awards.”

At the Kiwis reunion recently, NZRL Chairman Reon Edwards presented Sir Peter Leitch with a special recognition pounamu taonga to honour his tireless contributions to rugby league that dates back to the 1970s.

“Sir Peter has touched the lives of so many people within the NZRL community,”

“Whether it’s assisting league communities with fundraising or helping individuals who may not otherwise have the resources to reach their goals, he generously gives his time and money to support those in need without expecting anything in return and has done for many years,” Edwards says.

Leitch began his association with league through the Mangere East Hawks in Auckland during the 1970s before becoming involved with NZRL, the Kiwis and Warriors.

He was NZRL patron from 2011 to 2017, manager of the Kiwis’ successful 2005 Tri-Nations campaign and the Warriors have even retired the No. 19 jersey in his honour.

It’s safe to say his efforts go beyond the usual life membership criteria, his kind gestures purely done for the love of rugby league and its people.

“My newsletter (Mad Butcher’s Club weekly newsletter) has been going for almost 20 years now and just like everything I do, it’s for the game and the people within it,”

“I was humbled to receive the pounamu in front of the 2018 Kiwis team and a room full of Kiwis legends that have also given their lives to the game,” Leitch says.