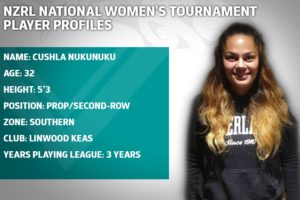 By Will Evans – Canterbury Rugby League

Cushla Nukunuku has more motivation than most of Canterbury’s rookie representatives ahead of the NZRL National Women’s Tournament.

The Linwood Keas prop/second-rower will make her provincial debut in Auckland next week, which shapes as the highlight of a season she has dedicated to the memory of her mum, Lena Nukunuku, who passed away two years ago this month.

“This is probably going to be my last year playing, but I’m really happy that I’ve finally got to represent Canterbury and play for my mum – I feel like she would be so proud of me,” Nukunuku says.

Nukunuku reveals that she gained her initial first-hand exposure to rugby league thanks to her mum, who played for Woolston Rams.

“When I think about it, I love the smell of deep heat and liniment – it reminds me of going into the changing sheds.

“I played a bit of social league way back when, but there was no competition then in Canterbury. Woolston Rams used to have a past versus present game, so I would play for mum.”

The 32-year-old mother of three has earned a maiden call-up for Canterbury midway through her third season of rugby league and is thriving in the representative environment so far.

“I love it, actually. You get to know the players from the other clubs better,” she explains.

“I played rugby (union) for eight years and felt like I wasn’t really learning as much anymore, so three seasons ago I thought I’d give league a go, and I love it.”

If Nukunuku transfers the passion she displays at club level to the rep stage, Canterbury’s rivals are in for a torrid time at the National Women’s Tournament.

She played in Linwood’s 2017 CRL Grand Final loss to Papanui and backed up for last year’s decider, when the Keas turned the tables on the Tigers 36-33 in an epic contest at Rugby League Park.

“Green and black is life to me – Linwood Bulls (rugby union team) and Linwood Keas is just home.

“(Winning the Grand Final) was the best feeling in the world. I can’t even express to the girls that are just new to the Keas this year about how much different it is when you go and play a Grand Final. It’s just amazing.”

Nukunuku has tried to take on more a leadership role in a new-look Keas squad in 2019.

“I feel like the smallest things in someone’s game – like at kick-offs, standing on the right angle so if you do drop the ball it goes backwards – it’s a small thing, but it could be (the difference in) winning a game,” she says.

“We’ve got Saga (Manu) and Lupe (Manu) who play for the Keas and also got selected for Canterbury, and I try to take them under my wing. Lovely, lovely girls and just small things like that, they’re like, ‘oh, that’s awesome’.”

But despite being one of the older members of both the Linwood and Canterbury teams, Nukunuku still finds inspiration from some of her experienced teammates.

“Sui, who doesn’t look up to her? She’s my age and she’s just 110 percent all the time. Even at training. She’s always lifting girls up.

“Not having Sui around because she’s constantly travelling with the Samoa league and rugby teams is a bit of a downer, so I’m looking forward to her coming back (for Canterbury). It’s going to be really good for the team, for morale.

“She’s played for Samoa, played for the Warriors and got called up for the Kiwis last year as well, so it brings a lot of good vibes for our girls.

“I also look up to ‘BC’ (Siataga). I just think she’s an amazing player, she just makes things look so easy. It’s almost like she glides on the field – anything with the ball really, she’s just really talented.

“If you ever need tips, she’s always willing to help out whoever. It doesn’t matter what team you’re on.”

But reuniting with Pauaraisa and Siataga is just one of myriad reasons Nukunuku is buzzing ahead of next week’s competition.

She is set to have her own personal cheer squad on the sidelines at Pulman Park.

“I’m trying to convince my partner to take some time off work for him and the kids to come up, because his family is from Huntly,” Nukunuku says.

“They’re all coming, his friends from there are coming to watch.

“As a mum, it’s sad because we leave on Thursday and I’m going to miss my kids, but then it’s also a bit of holiday. But you’ve got to work really hard as well.

Nukunuku relishes the physical side of rugby league. A winger in the 2017 Grand Final and a centre in last year’s decider, increasing her involvement in the more confrontational aspects of the game was behind her shift to the forwards this season.

But with up to five games to play over three days next weekend for the Canterbury team – who are aiming to build on their impressive third-place finishes in 2017-18 – as well as squaring off against the best players from the North Island for the first time, the National Women’s Tournament looms as a new challenge for Nukunuku.

“I’ve had tournaments for Canterbury Maori for rugby (union), but I haven’t had a full-on tournament like this before,” she enthuses.

“I’m excited to see the other teams and what they bring to the tournament – and also be able to smash people and not get in trouble!

“Even though I’ll be like, ‘oh snap, am I going to be at (the opposition players’) level’, I’m so, so excited. I’m constantly thinking about how I’m going to go into a tackle, or how am I going to chase that person down.

“All in all, I’m trying not to psyche myself out, but I think it’s excitement more than anything.”

The Mike Linton-coached Canterbury team’s NZRL National Women’s Tournament campaign kicks off at Pulman Park in Auckland on Friday, July 26 with an 11am clash against Mid Central Vipers, before facing the might of Akarana Falcons at 3pm.