Kiwi Fern Standouts in Round 5

The regular season of the rescheduled 2021 NRL Telstra Women’s Premiership has wrapped up. The St George Illawarra Dragons, Gold Coast Titans, Brisbane Broncos and Sydney Roosters have all secured their spots in the semi-finals this weekend.

Let’s look back on our Kiwi Fern talent in round five.

Dragon’s winger Madison Bartlett racked up 117 metres to go with a try and two tackle busts. Her intercept effort during the second half broke the spirits of the Roosters, who had the momentum for most of the contest. Bartlett, week in week out, continues to prove she is dangerous in and around the ball and definitely one to watch in the upcoming NRLW Finals.

Amber Hall had another powerhouse performance we’ve come to expect. Hall was at her rampaging best at Suncorp Stadium, charging her way over the line in the second half while racking up 214 metres with four offloads and four tackle busts.

Five-eight Autumn-Rain Stephens-Daly played a massive part in the match’s opening try. A high kick from Stephens-Daly bounced over the Titans defender, and debutant Paige Parker was on hand to score her first try in the NRLW. Katelyn Vaha’akolo played one of her best games of the season. Vaha’akolo posted up a total of 143 meters, 22 post-contact meters and the most line breaks in the game. She showcased her speed as a winger and attacking threat, scoring her first try of the season. Charlotte Scanlan was immense for the Knights, topping the game’s most tackles and fantasy points. Veteran Annetta Nu’uausala showed her veteran class and savy, racking up 126 meters, a staggering 42 post-contact meters, six tackle breaks and 19 tackles in the game. The Knights end their campaign for the 2021 season, focusing on the 2022 campaign at the back end of the year.

Playmaker Raecene Mcgregor continues to prove her skilled ability as a halfback, racking up a total of 107 kicking metres.

Kiwi Fern prospect Leianne Tufuga had a chance in the 35th minute of the game, swooping on a loose pass to streak 30 metres downfield, putting the Roosters in great field position. She also ended the game without missing a single tackle. Tufuga has made her claim as one of the best young players in the competition and will be one to watch in the finals.

The NRLW ladder after round 5 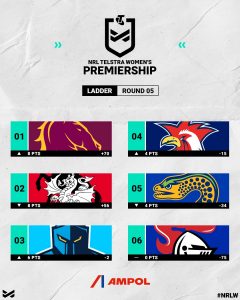 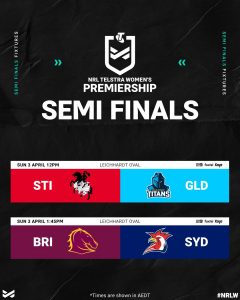