The young NZ side may have fallen over in their second match last year but this year managed to take home two wins from two matches against NSW Combined High Schools.

It was a special win for NZ winger Selesitino Ravutaumada who scored himself a hat-trick with some moments of brilliance from the Rotorua Boys’ High School student.

NZSST Captain Jordan Riki also dipped his hand in the try-scoring pot after a magnificent 30 metre solo run planting the ball in the right-hand corner. Hard yards were also put in by the NZ Loose forward Javvier Pitovao who was instrumental in setting up several of NZ’s ten tries.

The NSW team was once again plagued by unforced errors and dropped balls that prevented them from scoring until the final minutes of the game. The four-pointer attempts they did manage to string together were stopped right in their tracks by an outstanding NZ defensive line.

However their first and only try came when Franklin Pele crossed the try-line to be converted by Chris Holten to take the final score to 52-6.

Your line up for the game today: 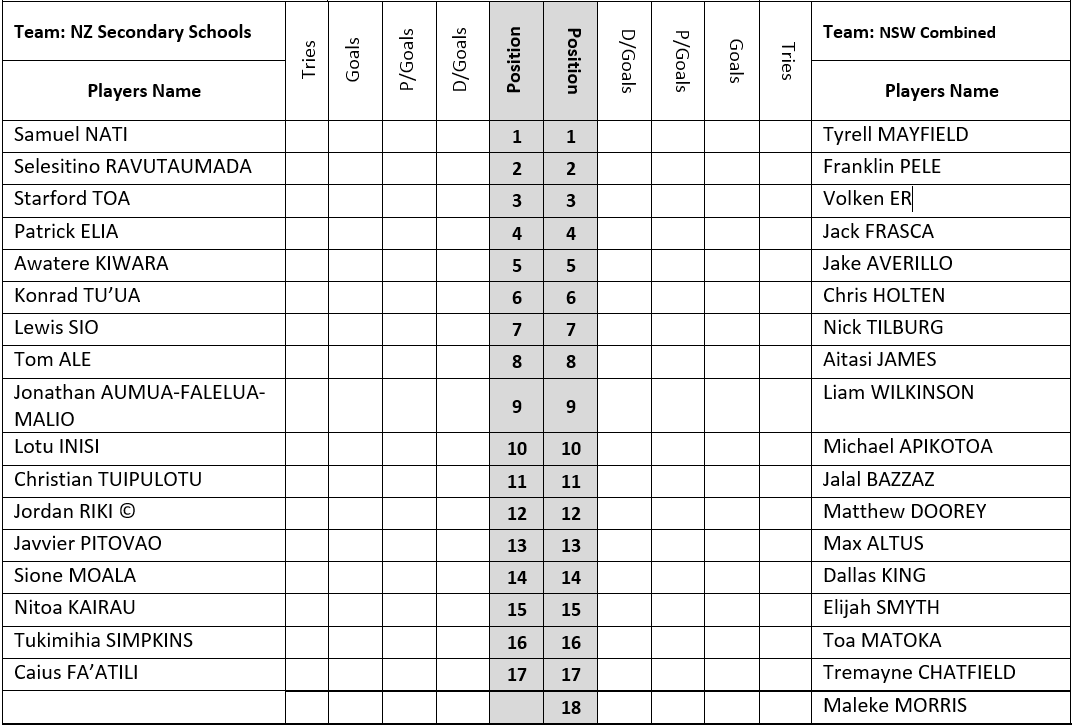 Joy was plastered across the faces of the New Zealand Secondary Schools Team following a convincing victory against the New South Wales Combined High Schools team at Puketawhero Park tonight.

The home side that included three players from last yearâ€™s team, Jonathan Aumua-Falelua-Malio, Awatere Kiwara and Lotu Inisi, recorded a 44-4 win over their opposition in the first game of a two match series. Local Rotorua Boysâ€™ High School boys, Tom Ale, Tukimihia Simpkins and Selesitino Ravutaumada had extra incentive playing on their home turf in front of family and friends.

Try number one for the New Zealand Secondary Schools team came in the first 10 minutes of the first half with stand-off, Sione Moala, getting the first taste of a four-pointer hunting out the gaps in the NSW defense early in the piece. The St Paulâ€™s College player then converted his own try taking his team out to a 6-0 lead.

After the NZ team denied the NSW Combined High School players of getting their first points on the board, and some impressive metres were gained by prop, Lotu Inisi, NZ Secondary Schools teamâ€™s winger, Kayal Iro crossed the line to extend their lead to 10-0.

With five minutes left of the first half, NSW Combined High Schools displayed promising signs of a try coming their way but were forced into touch by a tight NZ defense. An ability to transition quickly from defense onto attack and the great footwork of Awatere Kiwara had the second-year NZ Secondary Schools team player add another four points to their score â€“ an unsuccessful conversion taking them into halftime up by 14 points to nil.

The home side lifted the intensity up a notch further just minutes into the second half when Vice-Captain, Starford Toâ€™a identified a gap where he breezed through a scrambling NSW defense scoring his sideâ€™s fourth try. Â Sione Moala made it 20-0 with another successful conversion.

An aggressive run from Samuel Nati, the Southern Cross Campus player who captained his side to win the 2017 National Secondary Schools Tournament title, was then topped off by Nitoa Kairau who muscled his way through several NSW players to score in the left-hand corner. Moalaâ€™s boot coming to the party pushing their lead out to 26-0.

NSW Combined High Schools player could almost taste the try-line after his team strung together their best set yet, but the ball was knocked on inches from the white line.

Lotu Inisi once again put his hand up to gain metres on the opposition leaving nothing but a pile of destruction in his path as NSW Combined High Schools players struggled to stop the powerhouse prop. NZ capitalised on their forward momentum sending Starford Toâ€™a over the line for his second try of the match â€“ score being 32-0.

Despite having an already extensive lead, the NZ team showed no signs of slowing down. A beautiful grubber from half, Samuel Nati, saw Sione Moala plant his second try of the night, once again converting for a 38-0 lead.

Then came a full field run from NSW that, paired with smart play from his teammates, had Tremayne Chatfield go over for the teamâ€™s first and only four-points of the match.

Their struggling defensive line was tested one last time by Tom Ale who sent his local spectators into cheers as he added the cherry on top with the final try of the match converted by Moala. The fulltime score reading 44-4 to the home side.

New Zealand Secondary Schools team Head Coach Duane Mann had every right to be pleased with his teamâ€™s performance tonight.

â€œIâ€™m really happy that our boys kept them from scoring on multiple occasions although there was one try they managed to get in,â€

â€œWe went out with the aim of moving the ball around a lot and that worked for our game,â€

â€œThe team may have only had one and a half days training together but I think the performance out there tonight provides a good foundation for when we meet them again on Saturday,â€ he said.

Despite recording one of the teamâ€™s biggest losses to date, the NSW Combined High Schools Coach, Andrew Johnson took many positives from the match.

â€œIt was a red hot NZ side that we faced tonight and when itâ€™s all said and done, they executed well and we didnâ€™t,â€

â€œThere were many opportunities that presented themselves but we just couldnâ€™t capitalise which lead to tonightâ€™s result,â€ he said.

The next time the two teams meet will be on Saturday October 7 at Mt Smart Stadium, the first game of the triple-header that will be the pre-cursor to the NZRL National Premiership grand final and promotion/relegation games.